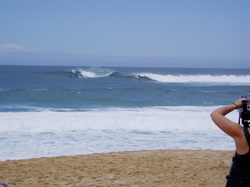 "In Peace We Trust"
2019 TTR: 30 minutes
An inspiring 30 minute documentary exploring the philosophy and mission of the Meta Peace Team.  Learn how co-founder C. Peter Dougherty and team members have used and shared active nonviolence techniques as alternatives to militarism over the past 25 years in The United States and abroad.


“A Difference is a Difference if it makes a Difference.” In Peace We Trust
2010   TRT 90 minutes
The life story of a Dr. Gene Pernell is inspiring and far from over.  Dr. Pernell is 74 years young and full of life.  He's a sharecropper’s son who dedicated his life to helping other people.  He’s a Storyteller, Teacher, Professor, Psychologist, and Entrepreneur   His journey is a reflection of the power of positive actions and the evolution of what's possible in America.


Tree Hugger Travel is a series of travelogues I created and produced for the Internet that promotes Eco-friendly travel adventures.
View a sample of Episode One
“Tree Hugger Travel Presents: Sayulita”
2008 TRT: 15 minutes
M. Petra Daher Producer Director, Writer, Reporter, Videographer
Tree Hugger Travel visits the quaint village of Sayulita, located in Nayarit, Mexico. Located 30 minutes from the Puerto Vallarta airport, Sayulita is a charming beach town that offers excellent food, surfing, fishing, music and a thriving art community. With the help of local guides we explore the highlights of this seaside pueblo and experience a taste of rural Mexico with a twist.


"The Odds are Good and Goods are Odd”
2006 trt: 28:00
M. Petra Daher Producer, Director, Writer, Reporter
Avid traveler, Petra Daher, hosts a trip through south central Alaska during summer solstice, when there is 18-21 hours a day of sunlight. Her video diary captures breathtaking nature, travel advice as well as testimonials from 14 Alaskan people. Highlights include Denali National Park, and the towns of Girdwood and Homer.


“Courage Under Fire Exposing the Occupation”
2004 trt: 28:46
M. Petra Daher Producer, Director, Reporter, Editor
This documentary introduces the International Solidarity Movement (ISM), a movement calling for international volunteers to support the Palestinian Nonviolence Movement.   Interviews with Jewish  co-founder Adam Shapiro,  ISM volunteers and Michigan Peace Team members reveal the dangerous and very important work of international peace workers. The film includes a call to action for slain ISM volunteer Rachel Corrie, an American college student who was trampled by an Israeli bulldozer, while trying to guard a Palestinian family’s home from being demolished.
The premier of the film was a successful fundraiser for the Michigan Peace Team.


“Freedom of Speech: Michigan Says No to War”
2004 trt: 55:11
M. Petra Daher Producer, Director, Reporter, Editor
A visual essay of the Michigan Peace Movement responding to war, featuring anti-war protests held over the past two years. The events documented include The Mid Michigan March for Peace, held in solidarity with the National March on January 18, 2003. The statewide march, Michigan Says No to War, including a Direct Action Breakaway March on February 15, 2003. Michigan Still Says No to War held on March 15, 2003 featuring Rep. Michael Murphy. Concluding with Global Day Against War and Occupation on March 20th, 2004.
In 2005 Cinematography shot for this project by Petra Daher appeared in a music video for The System of the Down’s song, “Boom”, directed by Michael Moore.


“First World Refugees”
1995 trt: 20 min
M. Petra Daher Producer/ Director/Camera/Editor
This story is a look into the unique ways of the Rainbow tribe, featuring the Oregon Regional Rainbow Gathering. Did you know that every year activists, academics, students and every day people build temporary villages on federal Forest Land in random locations throughout the U.S.A.? This free event is based on teamwork and inclusion.
Screened at the East Lansing Film Festival 1999


“Snake Rodeo”
1995 trt: 4 min
M. Petra Daher Producer / Director/ Camera /Editor
A mini documentary about a unique Art Fair previously held in Lansing’s Old Town. The video spotlights the local artists who created the event and the beginnings of a neighborhood in transition.
Screened at Solo Group and Solo Exhibits at the Creole Gallery 1996 & 2010


“The Unity Coalition”
1994 trt: 8 min
M. Petra Daher Producer, Director, Reporter, Editor
How did the city of Lansing respond to a planned KKK Rally at the state Capitol? They formed a group called the Unity Coalition and planned alternative events honoring diversity the day before and after the event. This mini-documentary features interviews with several participants and footage of the alternative ceremony that they developed.
Screened throughout Michigan as a model of conflict resolution strategies.


“T-shirts And Identity”
1992 trt: 8:10
M.Petra Daher Producer / Director/ Camera /Editor
A comical look at the status of the T-Shirt in American society. Once a measly under garment, now a political statement, souvenir and uniform. People share their favorite t-shirts and reveal much more than that.


Educational Documentaries
Documentaries produced, directed and edited for The Safe Schools/ Healthy Student Initiative and The Lansing School district include:

“What is the Safe Schools/ Healthy Student Initiative?”
2000 trt: 13:43
Shown at schools, workshops and conferences across the United States as a model of a conflict resolution program.
“Conflict Managers: Kids helping Kids”
2001 trt: 3:18 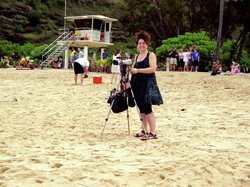