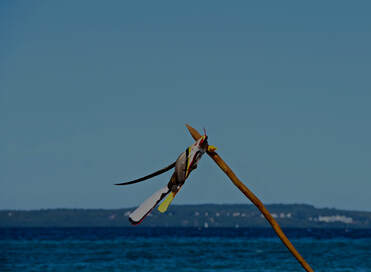 I’m a filmmaker, collector of stories and a media activist who uses my camera to film and photograph issues censored, misrepresented or ignored by the mainstream media.  I have a deep love of nature and am dedicated to using my storytelling skills to protect it.  Because of my concern and outrage over several water issues happening in my home state of Michigan I’m producing and directing a documentary film series called Great Lakes Water Warriors, and I’m seeking funding for the final stages of production.

The Great Lakes area has an abundance of water, yet many citizens don’t have access to clean or affordable drinking water due to unethical political policies and man-made disasters.  The challenges being faced in these communities could happen anywhere and public support is needed to ensure justice.  The goal of the documentary series Great Lakes Water Warriors is to educate and advocate for humane and environmentally centered water policies in Michigan and throughout the USA.

This documentary project provides important insight on many issues that the Great Lakes “Water Warriors” are fighting for and the narrative of the stories will be determined by community leaders and grassroots activists, not the media or politicians.  While collecting stories for this project, I realized that women are leading this movement like so many other movements throughout history and I wanted to shine light onto their messages.  Great Lakes Water Warriors is the story of neighbors from many communities coming together to heal and protect water and to reclaim water rights.

Since 2015 I’ve been collecting stories from the many grassroots “Water Warriors” living in the Great Lakes region who have been seeking solutions and justice.  The documentary series is told through a series of interviews with water protectors, experts, and advocates, who are working to protect water and enforce healthy environmental policies.  In the series, I explore the Flint Water Crisis, Water Shut off’s in Detroit, the movement to shut down Enbridge Line 5 and the Poor People’s Campaign.  The interviews reveal the power of change-makers and explore heartbreaking stories, like the man-made disaster that happened in Flint, Michigan.  Five years after the story broke the citizens of Flint are still living with the impact of the toxic water, and governmental mistakes and cover-ups.  Flint residents still don’t trust the water and for many dependences on bottled water has become a way of life.

I’m thankful to be in a unique position to collect the “Water Warriors” stories in a very personal way.  After spending the past five years protesting and working with people from all around the state, we have become a community of dedicated activists, citizens, and friends and we call each other “Water Warriors”.  We support one another because we know that we are all interconnected and that there is power in truth and solidarity.  The water defenders, community members and “Water Warriors” have much to teach the world and deserve to have their stories heard.  I plan to continue to work with the leaders of the Water Warrior Movement to ensure the message in the film will represent the most current information and that the people most closely impacted will provide the call to action.

My goal for this documentary series is to, promote the work of the grassroots “Water Warriors” and community activists fighting for justice in Michigan and the entire Great Lakes Region and for the discussion to lead to much-needed changes in water policies.  After covering the story for the past five years I want to follow up with the key female activists leading the movements to ask what next?  How can we help bring the voice of the people into a healthy political policy?  The final project will consist of several mini-documentaries that can be viewed together or separately.  It’s our responsibility to protect water for generations to come.  The Great Lakes provides critical resources to the entire region and holds 20 percent of the world’s surface freshwater.  Please take action to help support the people and the water of the Great Lakes region.
​
Petra Daher, Producer/Director
​

“Never doubt that a small group of thoughtful, committed, citizens can change the world.
​Indeed, it is the only thing that ever has.”  Margaret Mead 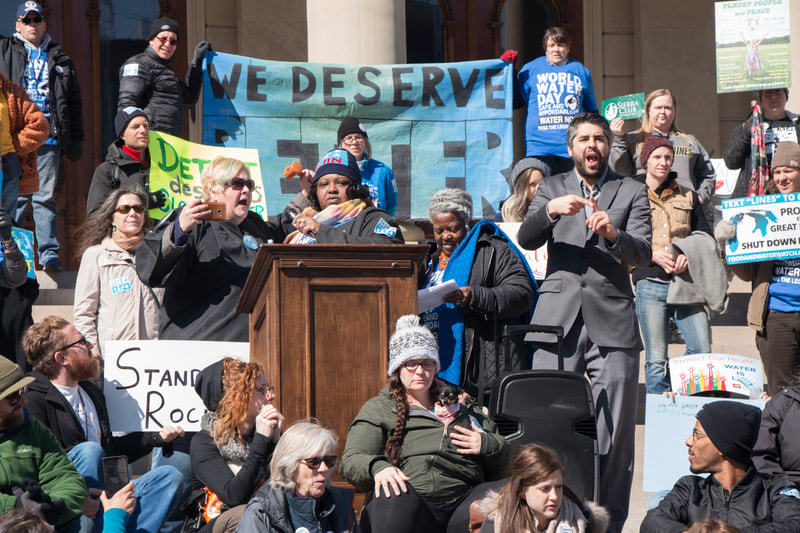 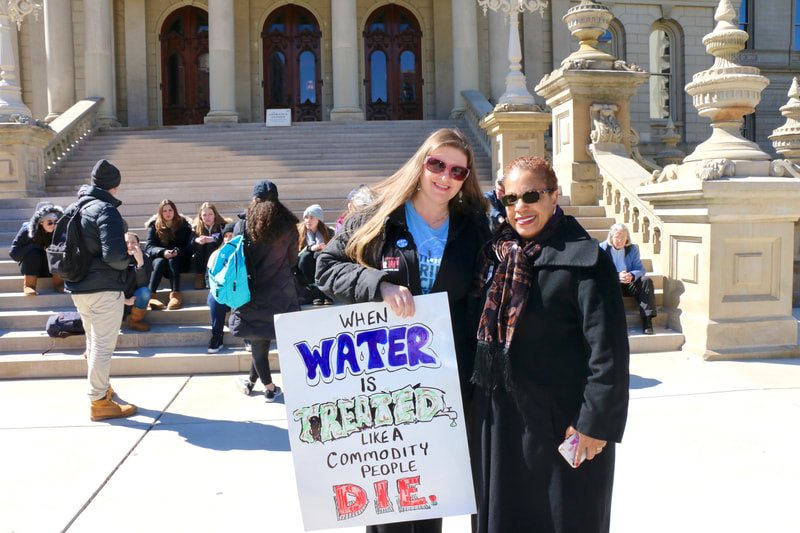 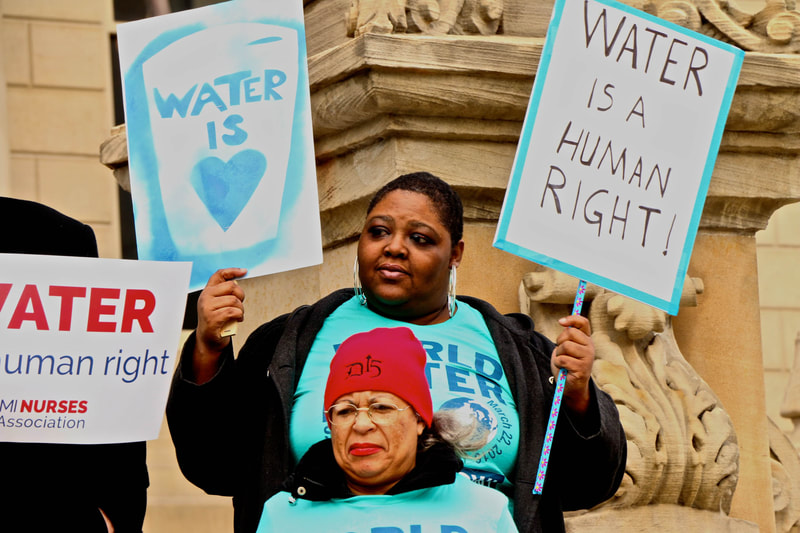 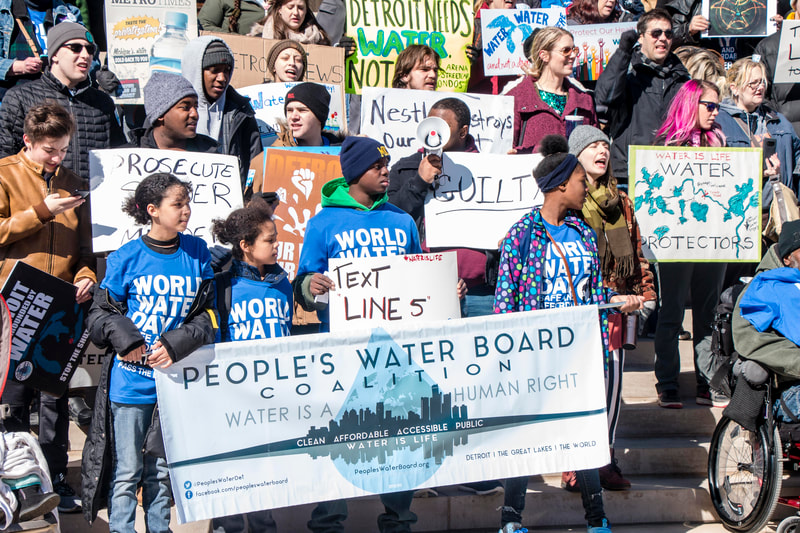 Watch a sample of Great Lakes Water Warriors Series
This sample of the series was created for the Water Water Concert Fundraiser that was postponed due to Covid-19. Make a tax-deductible donation through The Peace Education Center 501(c)3. Find the link below.

Want to be a Water Warrior? Here are some ways you can help support the film series.
All Proceeds will go to support the final stages of production, editing, and distribution.  Any Amount helps.​

The Process
You can make a tax-deductible donation at the Peace Education Center Website with your credit card.
Make sure to write Petra’s film Project in the Designation Line.
​
​The Orange Link will take you to the Peace Education Website,
"PEC Secure Network For Good Online site"
https://www.peaceedcenter.org/donate

2.Make a donation to Petra Daher on Venmo or PayPal
​

Send a check to
The Peace Education Center c/o Petra Daher. Write Petra Daher’s Film in the memo or send with the downloadable donation card. 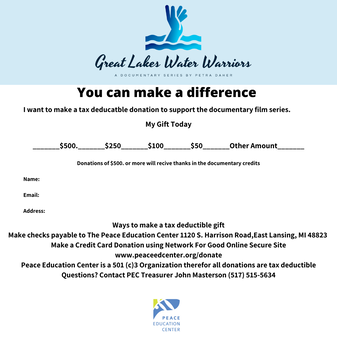 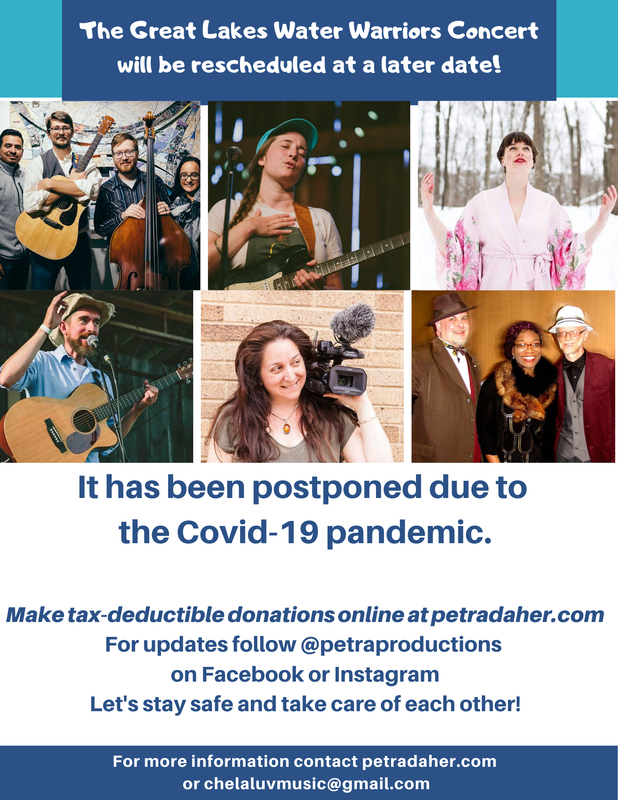 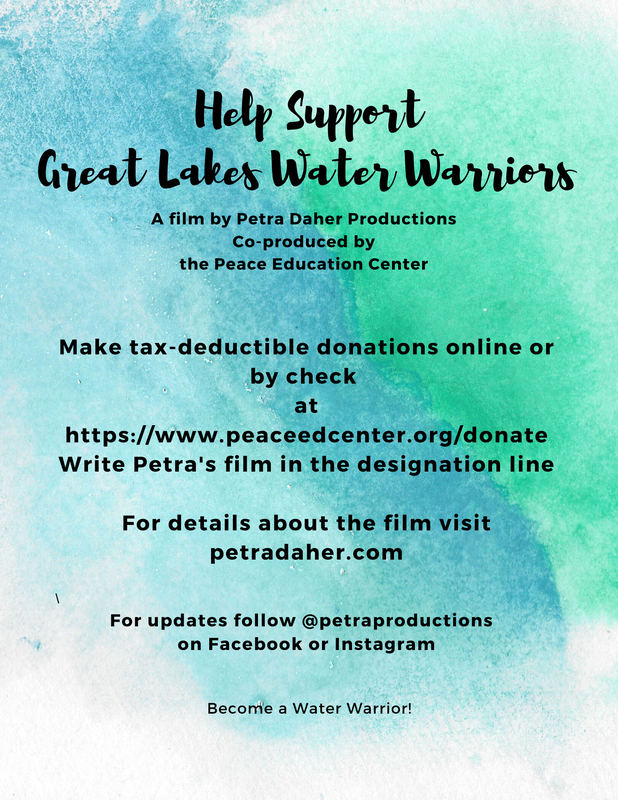